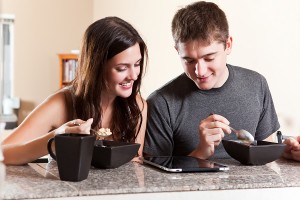 Developing a product that will stand out in the market place is a difficult task.  That task is a little easier when the market place is still developing; as is the case in the tablet market today.  With relatively few offerings to choose from, it shouldn’t be too difficult to make yours stand out above the rest.  But how do you do it?  How do you take your idea to the next level?  How do you compete against the likes of the Apple iPad?

Product development is a straight forward process.  It involves watching and listening to the customer, developing a concept that will deliver their wants and needs, and then optimizing that product to deliver exactly what the customer wants, consistently.  Seems easy huh?  Let’s take a tablet for an example.

You are a product development guy, charged with coming up with the next big competitor to the Apple iPad.  What do you do?  You go out into the world eager to watch and listen.  You purposefully go to places where you know you will see people using similar devices.  You go to places like Starbuck’s, PanaraBread Co., your local busy airport terminal, and you sit and watch.  You watch people engaging in all types of activities like surfing the internet, reading e-books, listening to pod-casts, checking their e-mail, streaming music and watching movies.  Some people are using tablets, some are using laptops, and some are using smart-phones.  Most people have these devices lying on a table or on their lap; deeply engaged in whatever it is they are doing.  So you watch.  You watch how they carry their devices when they walk in.  You observe what else they have in their hands and what they do with it all when they sit down.  After a while you start to get a good feel for what your device can be that will make it stand out.

One thing you notice is that many people set their iPad down and then keep their hand on it so that it doesn’t slide across the table.  OK, your new tablet will have a rubber back so you can set it down and not worry about it sliding off the table, check.  Another thing you notice is that everybody seems to be scrolling up and down pages pretty frequently.  You wonder if you are surrounded by speed readers or are their screens too small.  OK, we will have as big of a screen as we can, check.  You notice most people using headphones if they are watching movies or listening to music.  OK, speakers aren’t all that important so we will put them on the back so as not to take up valuable screen resources, check.

This all seems logical and is probably how Motorola came up with some of the smart features for their new Xoom.  I applaud them for their efforts but have one small criticism; I think they left out a critical step in the “Listen” stage of product development, scenario thinking.  The traditional Voice of the Customer (VOC) activity says to watch customers use similar products and find ways to improve on them.  With scenario thinking, you take the VOC and extrapolate out to similar scenarios where the product might also be used.  In the above situations, loud areas with lots of people, most people who want to actually hear their tablet will be wearing headphones.  This data alone may lead one to believe that speaker placement must not be all that important.  They could get away with having them on the back because most people will be wearing headphones anyway.   However, if you take scenarios into account, you would ask yourself, “Where else might people use this device for these same activities?” Maybe they would use them at home on their breakfast table, maybe while sitting on a couch or a recliner.  What happens then?  Well, as Michael Calore and Dylan Tweney point out in their recent review on Wired.com titled, “We’re Xoomin’, and it Feels Pretty Good”,

“…They sound fine if you turn the tablet around to face the speakers toward you, but if you’re holding the Xoom so you can see its screen, the sound is projecting away from your head. Everything sounds muffled: Movie dialogue is harder to understand, and music just sounds dead and lifeless.”

“…but when you plop the Xoom into the dock to watch a movie, the dock speakers sit behind the tablet, too. So it’s the same problem all over again, just a little louder.”

So, for all of the good additional features on the Motorola Xoom, they have dropped the ball on what many consider one of the main uses for a tablet, absorbing media, much of which is audio!  Hopefully this one mistake doesn’t hurt their sales too much.

This is a good example of what happens when the development team fails to thoroughly thinking through the many usage conditions of a product during the “Listen” phase of the development cycle.  So remember, don’t just watch and listen to customers at one of many points of use and assume you have seen everything there is to see.  Take and expound on that data with as many scenarios as your team thinks are reasonable.  Always think of new ways and places that you product can be used.  If you can make your product shine in those usage conditions too, then your product will clearly stand out above its competition.

More in this category:
« It’s Easy Was that good service? »

Email this to a friend.