We are, and continue to be, the pioneering organization for the Quality movement in the U.S.

Subir Chowdhury is the Chairman and CEO of ASI Consulting Group. He is a career quality and systems engineer. He works with all teams and provides leadership during planning and implementation. Subir’s expertise is in Design For Six Sigma (DFSS) and LEO® (Listen, Enrich, Optimize). He regularly advises CEOs and senior leadership in how to achieve bottom line results. Subir has been ranked among world’s top 50 thinkers since 2011 by Thinkers50, a nonprofit global organization that issues a biennial ranking of management thinkers based on their contribution toward the advancement of business management.

Official Biography: Click here
For more insight, Subir was recently profiled in a biographical retrospect that appeared in the weekend Edition of Prothom Alo, the leading newspaper in Bangladesh. The article is titled: “Quality-guru Subir Chowdhury: From Chittagong to America”

Subir authored 15 books and his books have sold more than a million copies and translated in more than 20 different languages world wide. His books are: 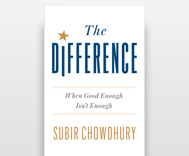 All Books From ASI